The courtroom, bar and home of the legendary scoundrel Judge Roy Bean 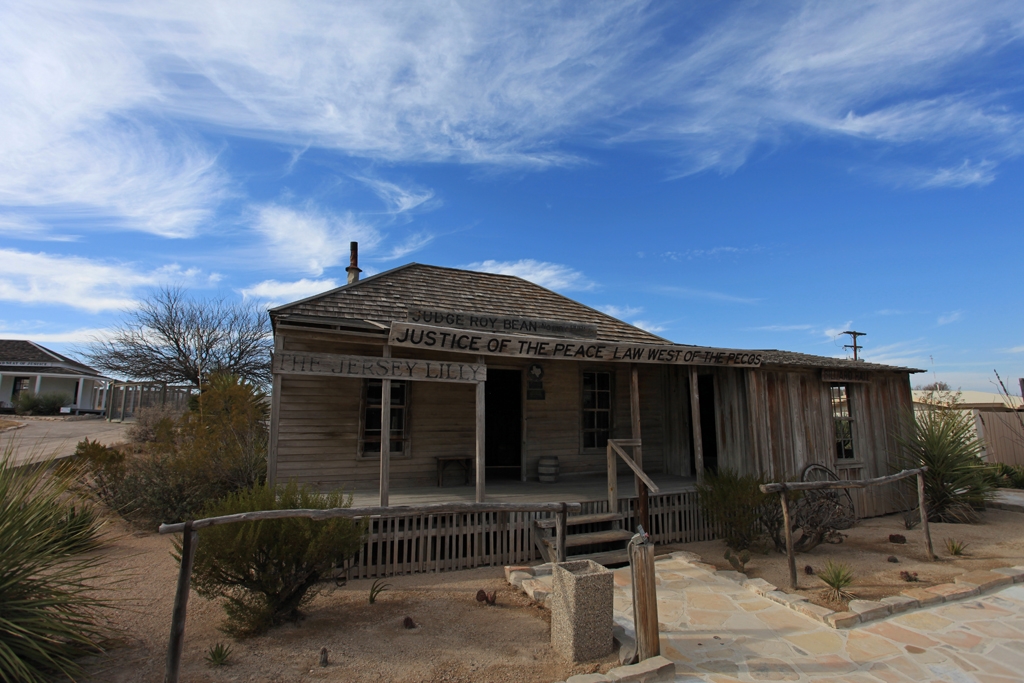 The Jersey LIlly Saloon The bar where Judge Roy Bean operated as bar keep and a justice of the peace.

The sign out front reads, “Ice Beer, Law West Of The Pecos”. I grew up hearing stories of Judge Roy Bean when I was a kid in Texas, so we had to pull of the highway to see the courthouse / saloon / house where all those stories began. Texas is the land of larger than life, and perhaps there was no one larger than life than Judge Roy Bean. Born in Kentucky in 1825, bearing the unusual name Phantly Roy Bean Jr. he left home at 16 to begin his life as a scoundrel.

He ended up killing at least two men in duels and wounding another. His first duel, fought over a woman, ended in him shooting the other man in the arm and both of them ending up in jail. He eventually escaped from jail by carving his way through the wall with a knife smuggled in for him in a tamale by a female admirer. After his second duel - also fought over a woman - he killed his rival, a Mexican officer. The dead officer’s friends caught him, placed a noose around his neck, seated him on the back of a horse, and left him to hang when the horse ran off. But after his captors left, another female admirer, presumably the one the duel was fought for, came and cut the rope.

Eventually, after running supplies for the South during the Civil War, he settled in San Antonio. He tried his hand at several businesses with his typical crooked zeal; he ran a dairy business but got caught watering down his milk, and was briefly a butcher who got his product by stealing unbranded cattle from local ranchers. He finally settled on running a saloon, but soon got bored of that as well and a local business person bought out his entire stock hoping that he would leave town. At this point he purchased 550 gallons of whiskey and headed out to Pecos county. After bouncing around a bit, he settled in a town later called Langtry named for a local railroad boss, George Langtry. Bean, however, claimed he had named the town after Lily Langtry, the ivory-skinned British beauty and actress. 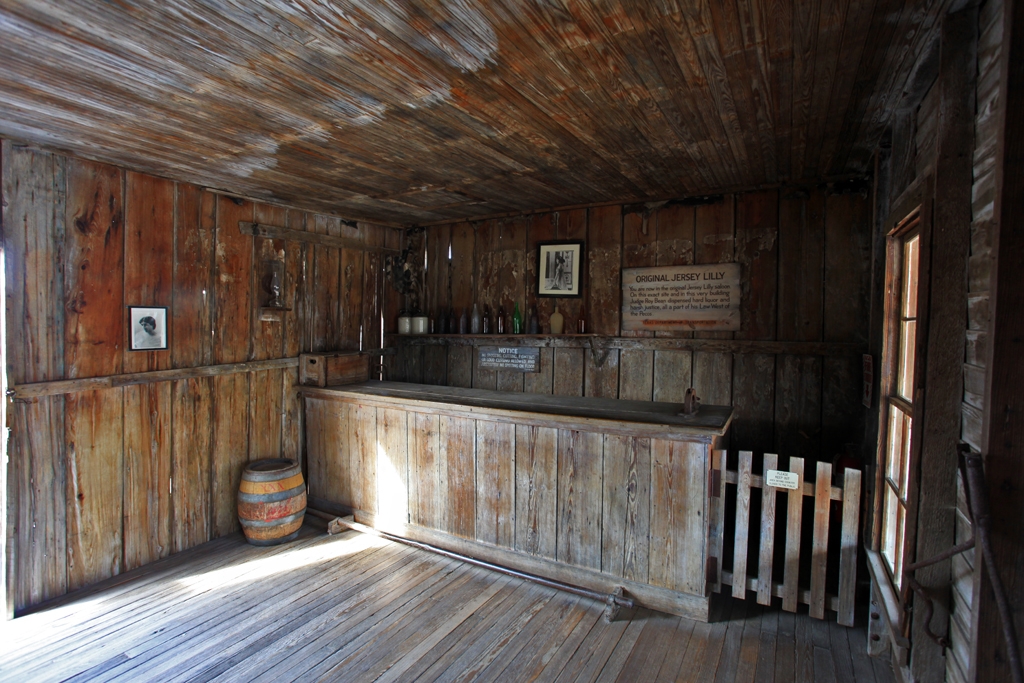 He set up shop and named his outfit the Jersey Lilly Saloon, serving the railroad workers building the San Francisco to New Orleans line. In 1882, thorough some gross oversight of his past, he was made Justice of the Peace for Pecos county, since the nearest court was 250 miles away in Ft Stockton. He ran the court from his saloon and picked his jurors from his best customers at the bar. These jurors were expected to buy drinks during recess and legend has it that during each trial he had his law book in one hand and a pistol in the other.

Maybe he wasn't the crookedest judge in Texas, but he certainly was the most colorful.

While he has a reputation as the “Hanging Judge”, in reality he was actually a strangely lenient kind of judge. Since there was no jail in Langtry, all justice was exacted by hanging or by fine. He only ever sentenced two people to hang, and both of them got away. Everyone else was sentenced to a fine, and generally for the exact amount they had in their pockets, all of which he kept for himself. He once found $40 and a gun in the pocket of a dead man, and convicted the corpse of having a concealed weapon and fined him $40.

His entire grasp of the law came from one law book from 1879 where he developed some interesting interpretations of the local statutes. One famous example was when an Irishman named Paddy O’Roarke killed a Chinese railroad laborer. When a mob of angry Irishmen demanded that O’Roarke be released or the saloon would be burnt down, Bean consulted his law book and proclaimed: "Gentlemen, I find the law very explicit on murdering your fellow man, but there's nothing here about killing a Chinaman. Case dismissed." 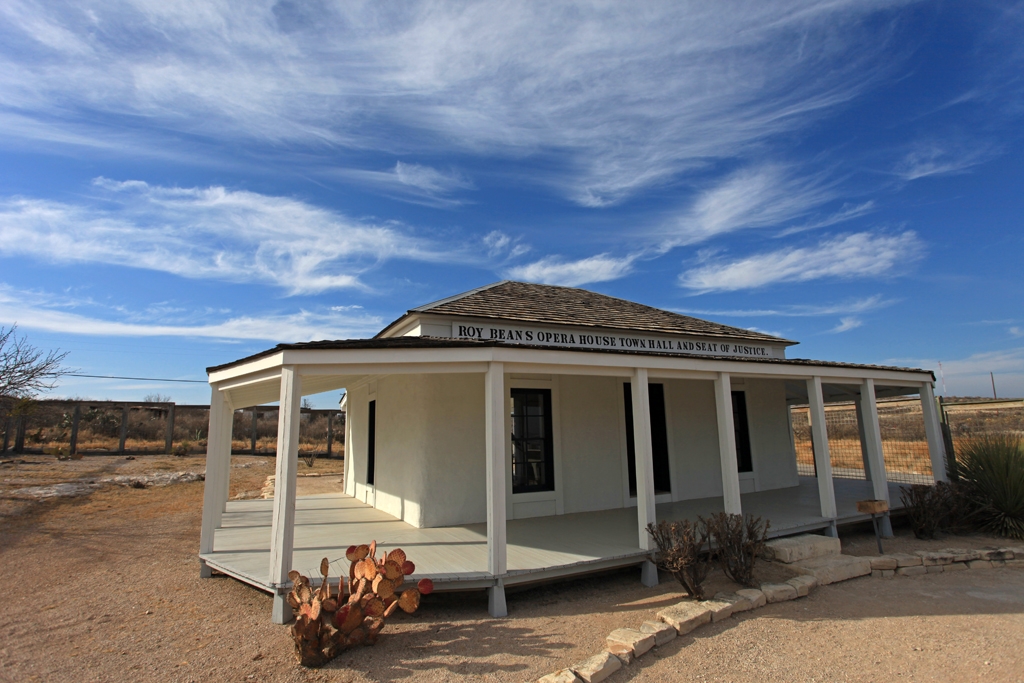 At this point many of his exploits became legendary. Had a bear that lived in the saloon named Bruno who presided over trials by the door and drank whiskey from a bowl. Perhaps most famously, he staged a prizefight in 1898. This wasn’t just any prizefight mind you, this was the world championship bout between Bob Fitzsimmons and Peter Maher. The problem was that prizefighting was illegal in most western states and in Mexico, and fight promoters couldn’t find anywhere to hold the fight. The enterprising Bean got wind of this and put in a bridge out to a sand bar in the middle of the Rio Grande river thereby allowing the fight to proceed in a no-man’s land between two countries. The Texas Rangers watched impotently as Fitzsimmons knocked out Maher in 95 seconds and the whole crowd of fight fans and sportswriters wandered back to the Jersey Lily for drinks before heading out and spreading the legend of Judge Roy Bean.

Bean ultimately did himself in after a night of binge drinking in nearby Del Rio in 1903, dying in his sleep in the night. He had always maintained that he was acquainted with Lilly Langtry, even going so far as building an opera house behind the saloon for her inevitable arrival. The Jersey Lilly herself finally did visit in 1904, ten months after Bean died. Supposedly when she arrived she was given the judges pistols (which some say she sent him as a gift years before) and Bruno the bear, who she promptly let go into the Texas wilderness.

Now the saloon and opera house are nicely maintained by the state of Texas at a roadside visitor center. You can walk through all of the rooms and sidle right up to the bar. One of the rooms has a series of photos including the Judge and Bruno as well as several other patrons. The river is nearby and the Eagle’s Nest canyon is stunning, but there isn’t much else to see for a long way in any direction. If you are heading from Big Bend to... well anywhere, you will likely head through here.

Big Bend National Park, TX
It’s even bigger than you think, and much prettier.
Next Article »

San Antonio, TX
These boots weren’t made for walking, and thats just what they won’t do.