Strict Standards: Non-static method Configure::getInstance() should not be called statically in /nfs/c01/h03/mnt/776/domains/cake/bootstrap.php on line 38
 50 States Or Less: The Minister’s Treehouse - Crossville, TN
map

God told him to build a treehouse... and build he did. 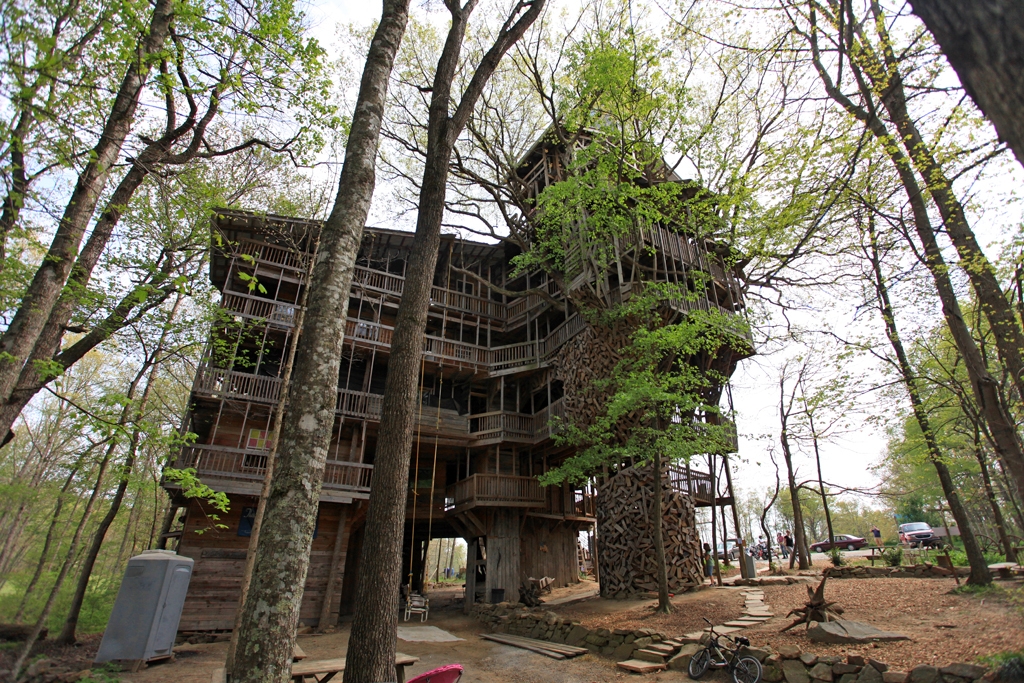 Treehouse Stairs The MInisters Treehouse. This shows the staircase that wraps around the main tree and the bulk of the church building.

This has been a trip full of amazing and strange places, but recently we experienced something that might be the most remarkable locale yet; The Minister’s Treehouse. Now that’s a pretty tall statement, and we are not yet halfway through this trip, but I can honestly say right now I haven’t been as surprised by anything else we have seen as I was when we pulled up to see this place.

It all started about 18 years ago in 1993 when Horace Burgess, a landscape architect who was also an ordained minister, had a vision from God. The Lord said to him, “If you build me a treehouse, I'll see you never run out of material”. He has been building on and off whenever he gets new shipments of material from God or anyone else and it is now 97 feet tall, 10 stories, 80 rooms, it encompasses 7 trees and has used 258,000 nails. Almost everything was scrap and he has only put in about $12,000, though I would guess he has put in a near infinite amount of time building this thing. 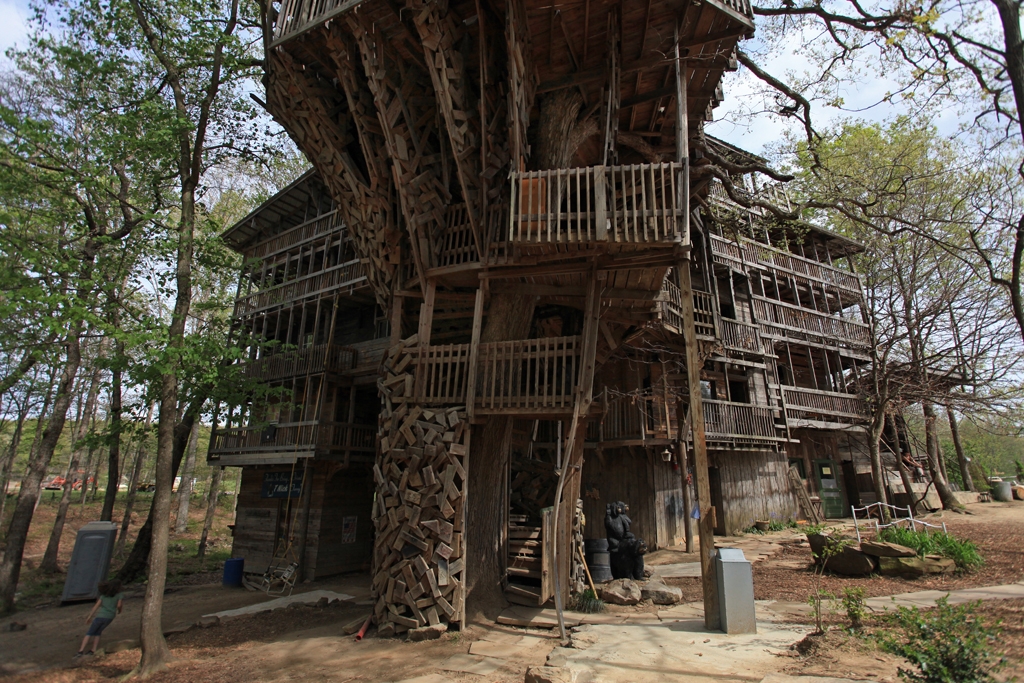 Treehouse Staircase The staircase wraps around an 80 food tree and goes all the way up to the bell tower.

At first sight we just laughed at the spectacle of it.

What makes it so incredible is the scale and the strange type of craftsmanship that went into it. I had seen some pictures before we got there and I still wasn’t prepared for the scale of it. It’s just completely overwhelming and I wasn’t the only person to just kind of laugh upon getting out of the car and seeing it for the first time. While it does rely heavily on the trees it also connects to the ground so it is also kind of a house-tree. It’s style is hard to pin down exactly, but is is sort of a cross between a Berkeley Mission style house, a California Gothic Victorian, a mining building, a castle from a Russian Fairy Tale and a Haunted House as art directed by Tim Burton. As you approach it, the building towers over you, partly because it is huge but mostly because, like a well designed Disney attraction, the perspective is all messed up - bigger at the top than the bottom - so it just seems impossible. 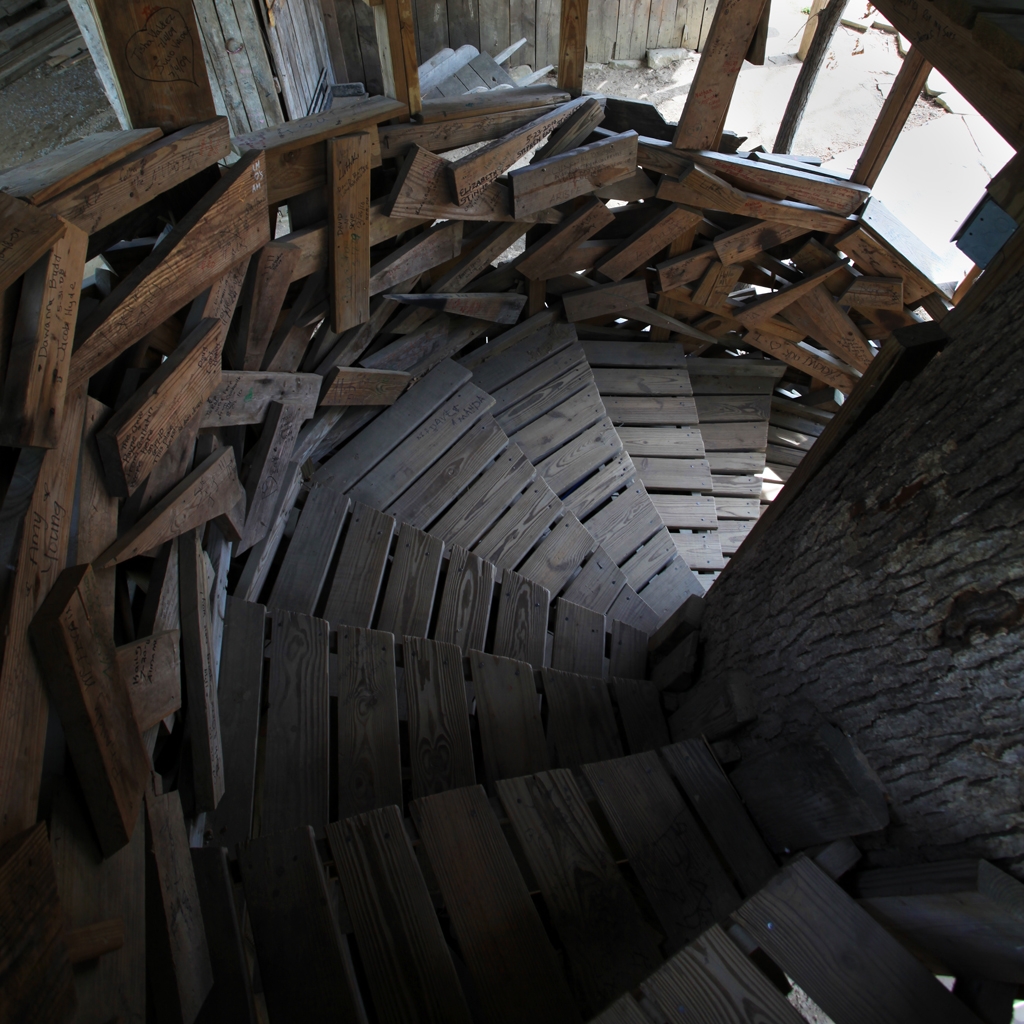 Spiral Stairs These are the stairs leading up the main tree

There are many ways to enter the building but I think the best approach is through the spiral stairs that ascend the main 80 foot tree part. The staircase wraps around the tree and the outside walls are made from tiny bits of cast-off 2x6 to form a kind of crystalline structure that’s surprisingly modern. The steps are very well made but with no sense of rhythm or symmetry, you really have to pay attention to your surroundings here since all expectations of where things should be are off. The stairs climb all the way to the top in a random and meandering path wending through rooms and passages until you get to an observation deck that is about 60 or 70 feet up underneath the bell tower. From there you can see the garden where the plants spell out JESUS and you can head on up into the tower. 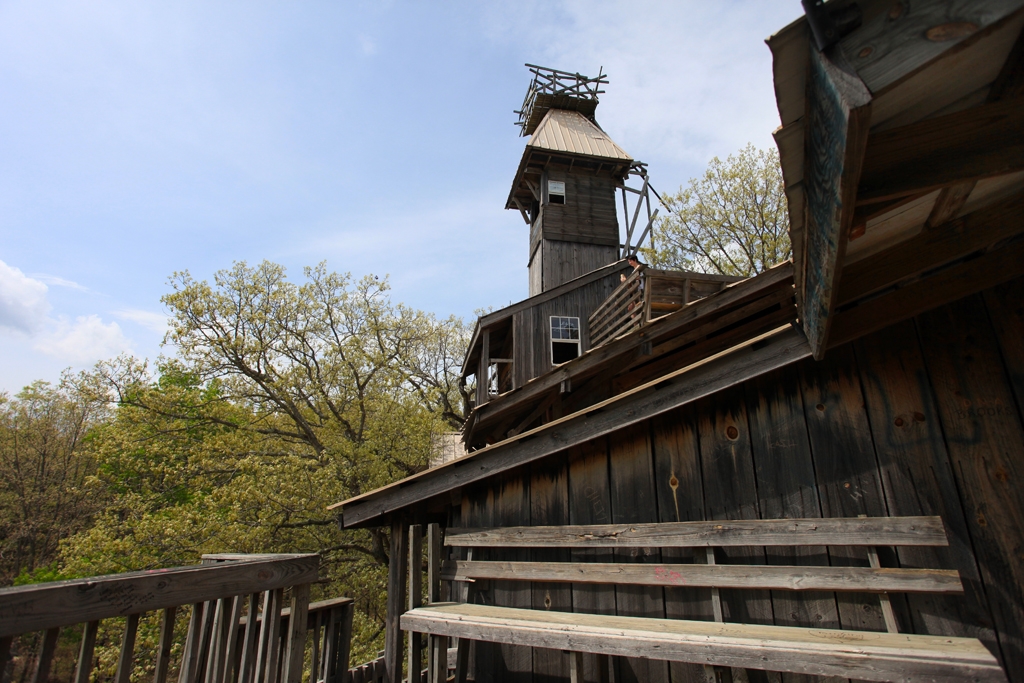 Observation Deck Looking up at the bell tower from the observation deck.

At the very top of the tree is a belltower that looks like it should house Rapunzel.

The tower is a feat of engineering since I don’t really know how he keeps it from falling down. There is a 5000 pound bell (made from old oxygen tanks) up in the tower and there isn’t much tree to support anything substantial. The view from the top is of the canopy of trees around and all of the treehouse below. You can climb up on a sort of tricky ladder to ring the bells, but it is pretty loud and if it is windy it’s a little disconcerting how much the tower sways. Every floor basically has a porch that runs all the way around the building and while I felt pretty comfortable walking around wherever, there were lots of people that were vocally worried about either heights or of the thing falling down. There were lots of big gaps between boards in the floor and occasional boards that were a little loose. 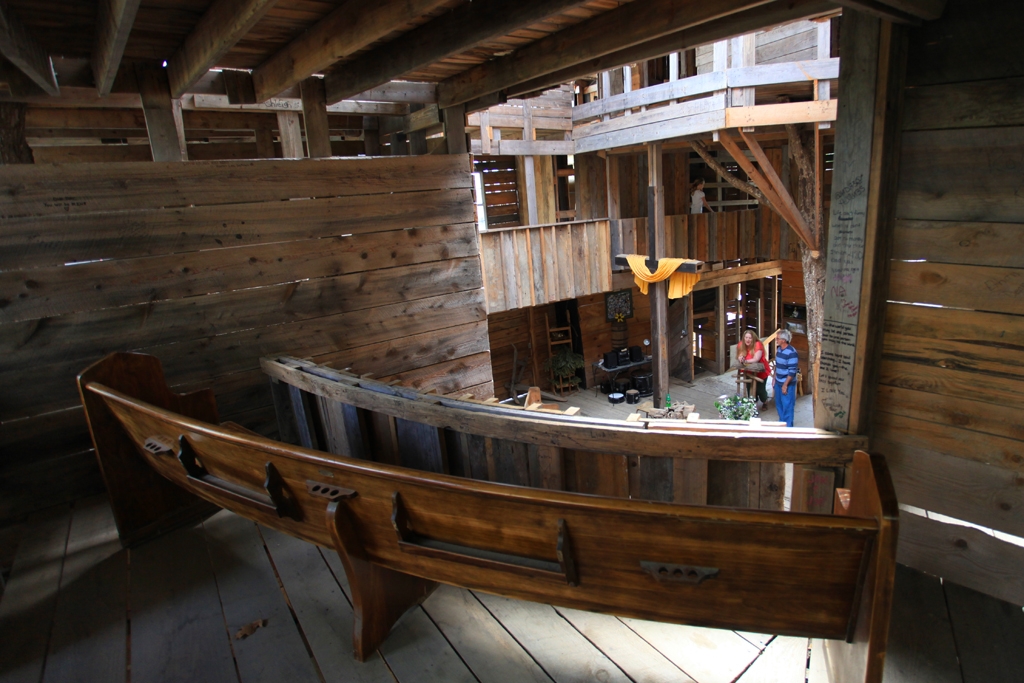 VIP Seat Supposedly the best seats in the house for a service at the Ministers Treehouse.

In the center of the building, starting on the 3rd floor is the church. Reverend Burgess was actually in the middle of Easter Sunday service when we got there so we got a sense for how it is used. It’s a huge space that’s about 30 feet tall with a giant skylight over it so it is beautifully lit with a set of pews on the ground floor but then built into the walls at random intervals and at crazy angles are other pews, it seems like hundreds of people could come to a service here. Part of the vision was that the church could also be a basketball court and they have in fact played basket ball in there.

It was a near perfect spring day when we visited and there were a probably 30 other people there, with kids running around and adults just sort of gawking. Supposedly on an average week the treehouse gets 500 visitors. There was a pretty fantastic sign on the way in that said: “No longer will vandalism, sex, drugs and alcohol be tolerated” and lots of other signs that said no smoking. That must be an ever present fear, since calling this thing fire-prone would be an understatement. I was a little surprised it hasn’t already had a fire as it is also wired for electrical in many places. Many others have said this, but this would never get built in California, or likely anywhere else since it is the worlds biggest code violation. I’m glad we have building codes for a lot of reasons, but it’s a shame that stuff like this can’t get built anywhere but deep in the middle of Tennessee.

International Towing and Recovery Hall of Fame and Museum

Chattanooga, TN
The fascinating world of tow trucks... in museum form!
Next Article »

Lynchburg, TN
It’s like bourbon, but totally different even though it is exactly the same.