Our second Civil War fort, but this one is less of a Spring Break vacation destination. 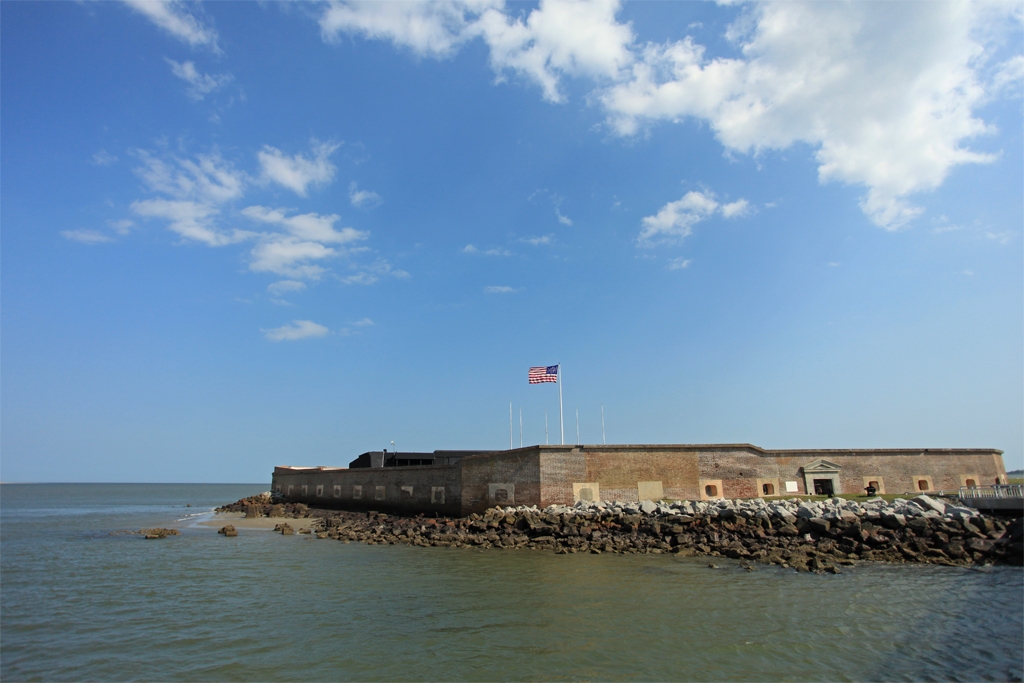 Ft Sumter This is where the first shots of the civil were fired. As seen from the boat coming into the island.

One of the things we had planned on doing on this trip was a tour of some of the important sites of the Civil War. I think we mostly failed at this, since we started heading west before we even got to Virginia, and we were chased away from visiting Shiloh Battlefield in Tennessee by a tornado, which I totally regret. Not the running away, as it was not a storm to take lightly, but I regret not seeing at least one important battlefield on the 150th anniversary of the war. Paul, the dog (in her bag) and I did however take the boat out across Charleston harbor to visit Fort Sumter, where the first shots were fired, and we did it 4 days before the 150th anniversary, so we weren’t the only ones with the same idea.

The visitors center is on the harbor next to the new aquarium, and you and a couple hundred other people pack onto an older, but sturdy looking ferry for the half hour ride out. Charleston has one of those Calatrava-like bridges that we saw in every state in the South, but doesn’t make it less picturesque. In fact it’s not a spoiler for me to say that the boat ride was the best part of visiting Fort Sumter. I’ve heard other people say they’ve seen dolphins, but we didn’t, just tourists straining to hear the narration of various events about the 3 or so other forts on islands that you can see on your way out, and a giant cruise ship heading out into the Atlantic. If you want to hear the history of the Fort and the war, sit inside, not outside. If you already know the story, or you get sea sick, or you are a photographer, find a spot on one of the decks outside. 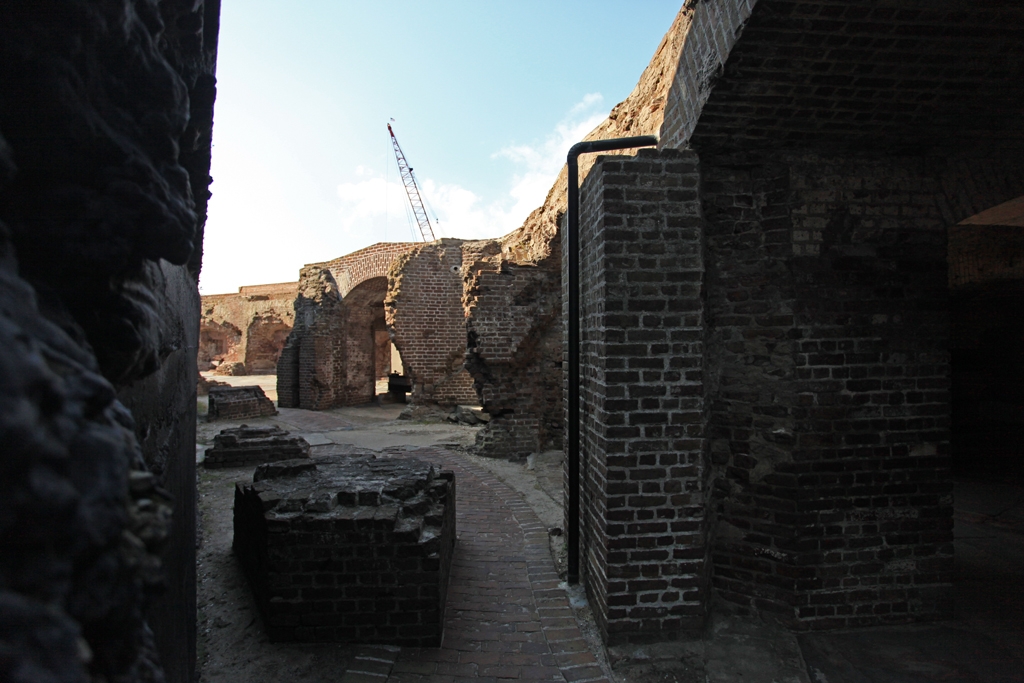 Canon Batteries Another view of the northern battery that was completely covered over when they built the new fort. Only after the park service took it over did they try and restore the original remains.

The fort stays the same size the closer you get to it, because is not very big. Once you make landing on the fort, you have an hour before the boat comes back, so you will have plenty of time to walk around, visit the gift shop, take some photos etc. In fact that might take you 15 minutes, if you walk really fast, or you don’t care about the Civil War. Fort Sumter is not Alcatraz, this is not a place to kill an afternoon, in fact, it’s not really even Fort Sumter, at least not the version from the Civil War. It was shot at for the entire length of the war, and was pretty much leveled. The photos inside in the museum show a bunch of guys hanging out near a big pile of bricks with some cannons nearby.

The fort was commissioned after the war of 1812, but was clearly not a priority, as building didn’t begin until 1827, and it still wasn’t finished in 1861, when the Confederates and then the Union started shooting at it. It was later put back together somewhat for the Spanish American war in the 1890’s, and they added lots of bigger guns, and a big concrete building in the middle which they painted black, which is mainly what you come to see today.

So a short history of Fort Sumter’s Civil War, which leaves out lots of details and names. The fort was originally held by the Union, and at 4 am on April 12th 1861 some guys across the water started shooting at them. As it was ungodly early, and also because the war just started so maybe they were unprepared, they didn’t start shooting back until 7 am, after they’d had breakfast. The first shots were short, because they didn’t want to shoot from the top level where the shots go farther because you could get shot standing up there, and also because the guys shooting at them were pretty much out of range anyway. They only had ammunition for 6 guns, and had to resort to using all their socks when they ran out of cloth gunpowder cartridges. 34 hours and 3000 Confederate rounds later and with most of the fort on fire, the Union soldiers handed over the fort. One of their terms of surrender was a 100 gun salute to the American flag, which didn’t go so well. The 47th gun went off while it was being loaded, and private Daniel Hough became the first casualty of the Civil War. After that they decided to just do 50 gun salutes, presumably because it takes less time, and also now that there’s a war on, it’s probably not a good idea to just shoot cannon balls and what-not into the harbor for no reason. The Confederates held the fort until February 17th, 1865, despite being shot at by Union gunships for 4 years. The fort was abandoned before Sherman reached Charleston, so technically (and I’m sure modern Confederate sympathizers love this!) it was never re-captured by the Union army. I guess if you had to spend the war somewhere, it was a pretty good spot, certainly better than ending up at Shiloh, Antietam or Gettysburg. The total casualty list for the fort was one Union soldier killed, one wounded in the 100 gun salute mishap, and a wartime total of 52 Confederates killed, and an unknown number of slaves. 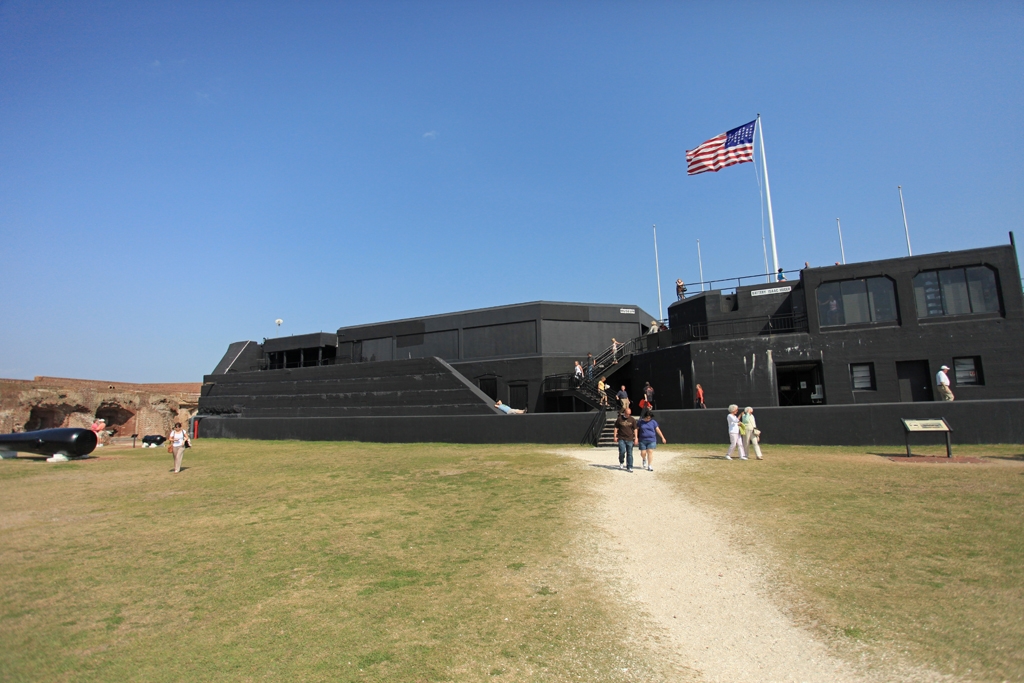 Battery Huger After the war a new blockhouse style fortification was built on top of the old fort called Battery Huger. Painted black it looks really out of place here.

We saw some people visit the fort by kayak, which is pretty easy to do, you can almost walk across a sandbar from the adjoining peninsula, and the harbor is extremely pretty, with a couple of little islands with old stone forts on them, as well as the view of Charleston, which is no slouch when it come to being picturesque.

So yeah, it’s not the most exciting thing to take a boat ride to, but it is historically significant, and you get to see some views of Charleston you wouldn’t normally see unless you have a sail boat. Or a kayak.

Savannah, GA
The king of oak lined avenues.
Next Article »