Home of the Muffuletta 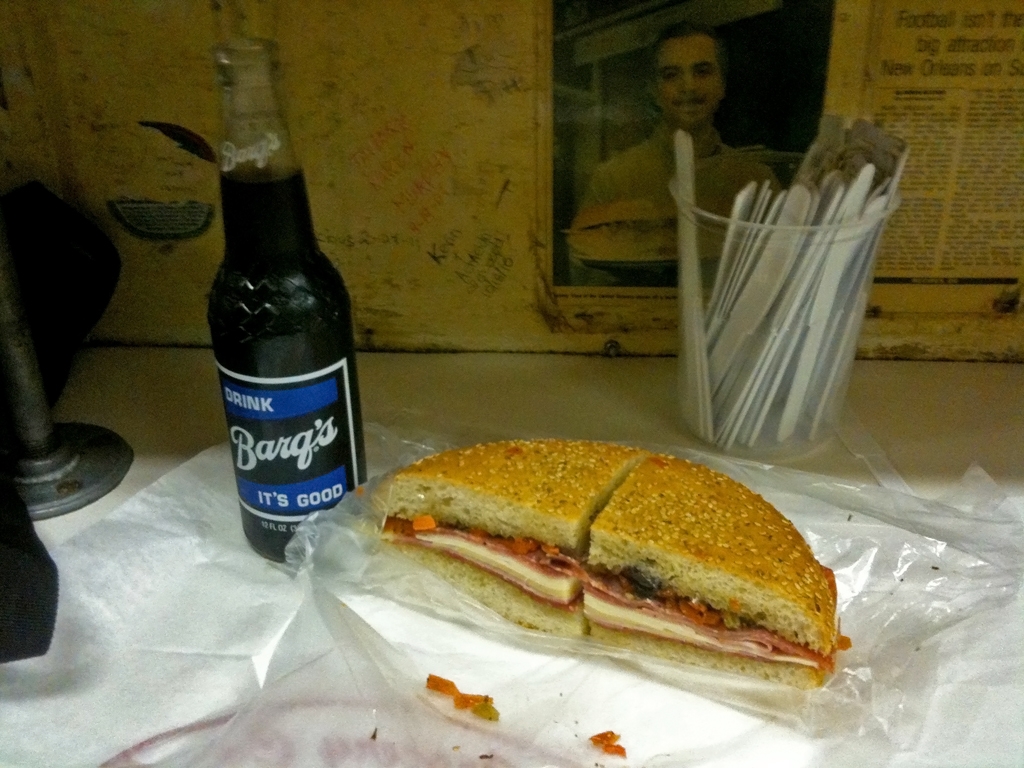 Central Grocery Muffuletta One of the great sandwiches of the world. A perfect balance of salami, ham, mortadella, provolone, olive salad on a muffuletta roll with the requisite Barq's root beer in a bottle.

New Orleans has many claims to fame, from music, to drinks to food. The list of amazing things that got their start in this incredible town are too hard to count. Food-wise you have your po-boys, your gumbos, your dirty rice, beignets, jambalyas. But one of our favorites, especially mid-day of walking around NOLA in the heat, is the Muffuletta Sandwich. For our money it belongs in the Pantheon of worlds best sandwiches.

This simple sandwich was created first at Central Grocery, an Italian market on Decatur st. just a few blocks down from Cafe Du Monde. The owner of the grocery, Lupo Salvatore, noticed that many of his Italian immigrant customers were purchasing meats, cheese and olive salad with a loaf of bread, and in the sicillian fashion, eating them all separately. They would balance their foodstuffs on their knees precariously while eating. He noted to them that if they could put it together into a sandwich it would be much easier to consume. He put it all together on a Muffuletta roll, and when customers just started asking for the “Muffuletta”, the legend was born.

It is a deceptively simple production, greater than the sum of it’s parts. The Muffuletta roll is just the right amount of softness while being able to hold up to the oil from the olive salad. The balance of meat (salami, Italian ham, and mortadella) to cheese (provolone) is just right without being either or. Then the olive salad is a mixture of green and kalamata olives, garlic, anchovy, capers, parsley, olive oil and a few other things.

The grocery is an amazing place in and of itself. It shows every one of it’s 105 years and is literally packed to the rafters with stuff. I have only ever seen the place with a line out the door and then winding through the aisles inside straight to the guy making sandwiches. It is an enormously popular place for very good reason. A half sandwich is enough for one person, the rolls they make them on are huge and then they cut them into quarters. So the in the photo above, those two quarters are a half. The recommended imbibe is a Barq’s root beer in a bottle, a local favorite. You can also buy the olive salad by the jar if you want to try to make the sandwich yourself later.

The sandwiches actually keep pretty well so you can head out and eat them in Jackson square or up on the levee, but I really enjoyed having ours there. They have a big communal table, and a bar along side the kitchen that is full of articles about them, photos of visiting celebrities, and people’s names and dates that they visited. It’s loud and raucous and crowded but that really adds to the perception that you are getting something special. I count this place as a don’t leave New Orleans without going here kind of experience.

Houston, TX
Home of the second worst roads in the country.
Next Article »

New Orleans, LA
Not a vegetable in sight, unless you count the potato chips.