Not a vegetable in sight, unless you count the potato chips. 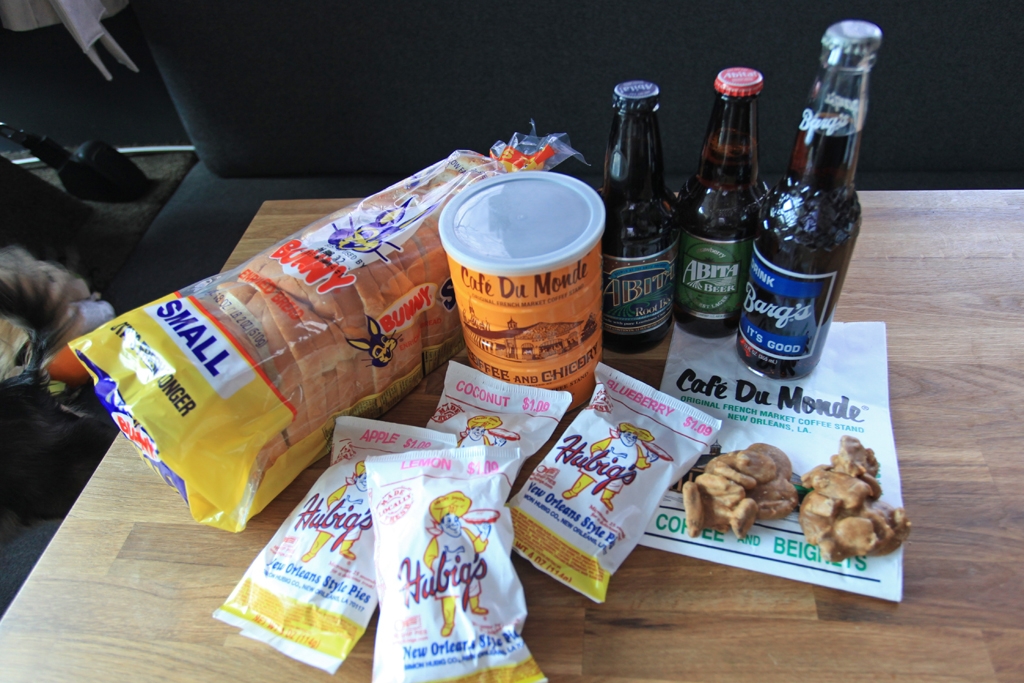 Variety of Southern "Food" Some of our regional favorites from the south.

One of the many things I was looking forward to on this trip was the chance to try some of the regional foods of the South that you can’t find in stores out west. Unfortunately a lot of grocery stores in the South are just like the ones in Arizona, or Kansas, or anywhere really, but there’s a couple of areas of the store that still have regional differences, mostly the bread, chip and soda aisle.

Or pop aisle, or Coke aisle, or whatever sweet carbonated beverages are called in your area. Every time I went shopping I’d take a peek to see if they carried anything different. That and eating a lot of BBQ across multiple states we managed to sample a large number of regional sodas. Barq’s in New Orleans comes in a bottle, which for me makes it taste way better than the canned stuff. Our friends in Atlanta love the North Carolina based Cheerwine, which tastes like cherry Coke gone horribly wrong. (In my opinion) I was intrigued to hear that Krispy Kreme in Salisbury North Carolina makes Cheerwine donuts, but we didn’t go to Salisbury, and it was the wrong time of year, so we didn’t get to try one. Both brands are owned by Dr Pepper/Snapple now, but Georgia created both RC Cola, and Nehi, which makes lots of flavors, we found and tried the grape and the peach, which actually tasted like grapes and peaches. I like RC Cola better than Pepsi, and more than the fruit flavored Nehi’s, but then I generally don’t like fruity sodas. South Carolina has Blenheim’s ginger ale, which is good in cocktails, but probably isn’t the best thing to pair with pulled pork, as I found out. (too ginger-y) The winner of the regional soda contest for me is ale-8-one, which is made in Winchester Kentucky, and is a mildly sweet ginger ale that I later found out has the same amount of caffeine as Coke. It’s distributed only in Kentucky, Ohio, Indiana, Tennessee and parts of Georgia. The name means “a late one” or the latest thing in soft drinks, (it was the winning entry in a contest,) and the locals like to mix it with bourbon, to make a drink called the double wide, the squirrel, or the Kentucky gentlemen. Thanks to Bar 308 in Nashville I got a taste for Tennessee whisky and ginger ale, and ale-8-one is an excellent stand in for their delicious home-made ginger ale. Perfect drink to combat the hot Southern weather. 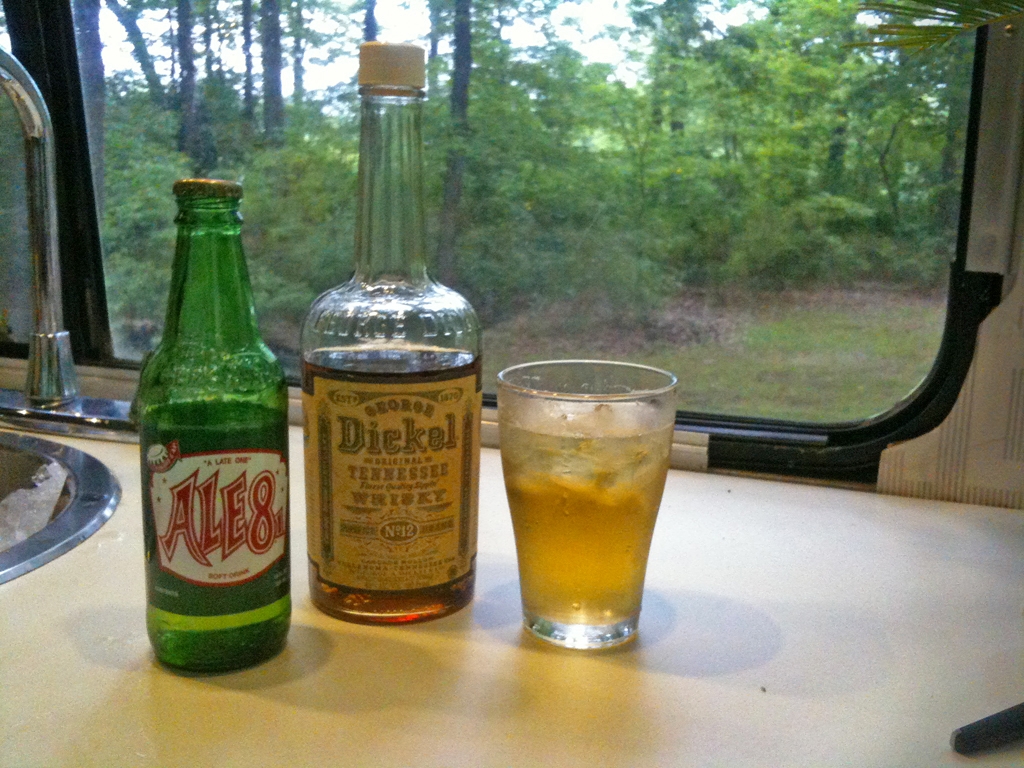 Tennessee Whiskey and Ginger Ale Tennessee whiskey is a little drier than bourbons so it doesn't sweeten up the mixture too much. The best combo we found was 2 oz. George Dickel mixed with about 4 oz. Ale 8 One ginger ale from Kentucky.

The city with the most regional foods that we found is New Orleans, which really shouldn’t be a surprise. At one store I found Zapp’s chips, Bunny Bread, Hubigs pies, RC Cola and Barq’s. Bunny Bread is your run of the mill white bread, excellent for getting stuck in you teeth when you eat a sandwich, but even better for sopping up BBQ sauce. The logo is a cute rabbit, obviously. The company that makes it is actually from Georgia, but we found it in stores all across the South. Zapps chips are kettle chips that are “cajun made” which is hard to verify, but they are indeed made in Louisiana. They make plain kettle chips as well as flavored chips, including Tabasco, bbq, cajun dill, voodoo (an accidental mixture of other flavors), sweet potato and “cajun crawtator” which may or may not have actual crawdads in it. New Orleans also has Cafe Du Monde, which only serves coffee with chicory and beignets with half a pound of powdered sugar dumped on top. The line is usually 100 people deep, but it moves fast, and if you don’t know exactly where Jackson Square or Cafe Du Monde are located, just follow the line of powdered sugar. No worries about the hours, this location is open 24 hours a day, and only closes on Christmas. The beignets are pretty good, and Paul swears by the chicory coffee, it comes in cans so we stocked up on it for the trip. You can find the coffee at Whole Foods, but you’ll have to make your own beignets.

Another only in New Orleans food item are Hubigs pies. I heard of these from watching Treme, a character was craving dessert and someone had one in her purse and it just made his day to get one. This makes more sense to me now, since I read up on their history. They are local to New Orleans, though you can get them as far north as Baton Rouge, but not much beyond, and their small factory was nearly destroyed by Hurricane Katrina. They didn’t get up and running until early the next year, and nearly didn’t get up and running at all. Apparently they are a favorite of local schoolkids, since you can get them at any corner store. The flavors are seasonal, so you may find coconut, apple, peach, blueberry, lemon, chocolate, pineapple or banana, depending on the time of year. Locally the best sellers are apple and lemon, and I agree, the apple was the best, though I disagree with the lemon. Unlike a Little Debbie pie, Hubigs only have a shelf life of a week, and for a mass produced deep fried pie, they are actually pretty good!

if you still have room for something sweet after hunting down and eating a couple of Hubig’s pies, you might want to find some pralines. Apparently I say the word pralines like a Yankee, it’s prah-leans, not pray-leans. Either way the stuff is everywhere. They are made from sugar, butter and cream, and usually cover a mound of pecans, and are sort of like fudge, but more brittle. A little goes a long way, and this is from someone who really likes sweets. We liked the ones we got from a candy shop in the French Quarter, called Southern Candymakers, but there’s an unlimited number of places that make pralines in New Orleans, looking at the map I think there’s at least 4 candy shops in the French Quarter alone.

I should note, if you are hungry now, or just curious, that most of these items can be purchased online. Zapps, Southern Candymakers, Ale 8 one and Hubigs definitely ship their products direct within the us, and I found Cheerwine and Nehi soda on Amazon. Or you can use the excuse of culinary tourism to go to New Orleans!

New Orleans, LA
Home of the Muffuletta
Next Article »

Pensacola Beach, FL
A random selection of some interesting buildings in this Florida beach town.