A Californian’s first encounter with a tornado 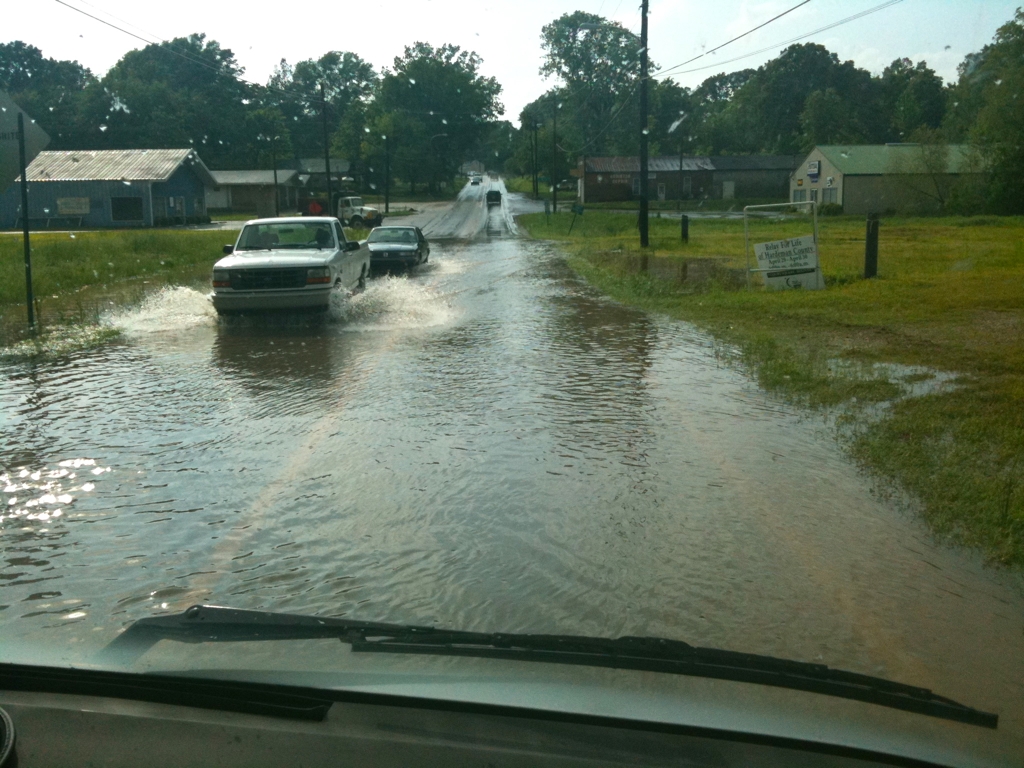 Flooding This is the day after the big tornado that hit Alabama. We saw a lot of flooding in Tennessee, but this was the only bit we actually had to drive through.

We left Chattanooga and headed towards Lynchburg, which on the Jack Daniels bottle states the population is 361, which it was at some point, but I think it’s more like 5,000 now, but it’s still a tiny town with Jack being pretty much the main industry. Our campground appeared to be abandoned, the owner was reached by phone, but was out of town, and the campground itself seemed to have been last occupied maybe sometime last year, possibly when Lynchburg hosts it’s annual BBQ cook-off. It had 2 other trailers parked in it, but they also appeared to be abandoned. The bathroom was built for a lot of people, and the whole set-up further proved to me that there’s really nothing spookier than an empty campground at night... maybe an empty summer camp next to a lake.

In the middle of the night it rained. It does that a lot out here. (It does that a lot during the day too.) This was a problem when we got up in the morning and remembered that we had chosen a spot on a slight hill, with our nose pointed up the hill, and with another hill behind us, so we couldn’t back out of the spot. The coach is 13,000 pounds and front wheel drive. This is not usually a problem until you park on a muddy hill. Our first couple of efforts to get it up the hill and onto the gravel were met with flying mud and curses, so we went into town for lunch at Miss Mary Bobo’s and hoped the ground would dry out a bit.

We finally found out what a Dollar General is, (disappointingly it’s pretty much a Walgreens) that fortunately sells large doormats, which along with our patio astroturf gave their lives for a good cause. We used one under each front wheel and over the course of 45 minutes we managed to inch our way up the 10 feet of hill. We were very proud of ourselves for getting it unstuck, not needing to call somebody with a tractor, and also for not falling out in the process.

We cleaned the mud and sweat off ourselves and got back on the road, with the idea of trying to get as close to Memphis as we could before getting tired, and then seeing if staying in a Wal-mart parking lot is something we wanted to do more of. The weather was fine until we got to Savannah (Tennessee) and it was just starting to rain when we went into the store to get supplies. While inside I thought I heard an alarm, but later when we went back outside to make food, I heard what it actually was, the big storm in Alabama had apparently made it’s way north and the sirens were going off. Paul, having lived in the Mid-West was less alarmed by this than I was, as the only time you hear those go off in California is the one day a week or month where they test them. (The one in San Francisco used to mean to me that I was last for class, because it’s going off, so it must be noon.) 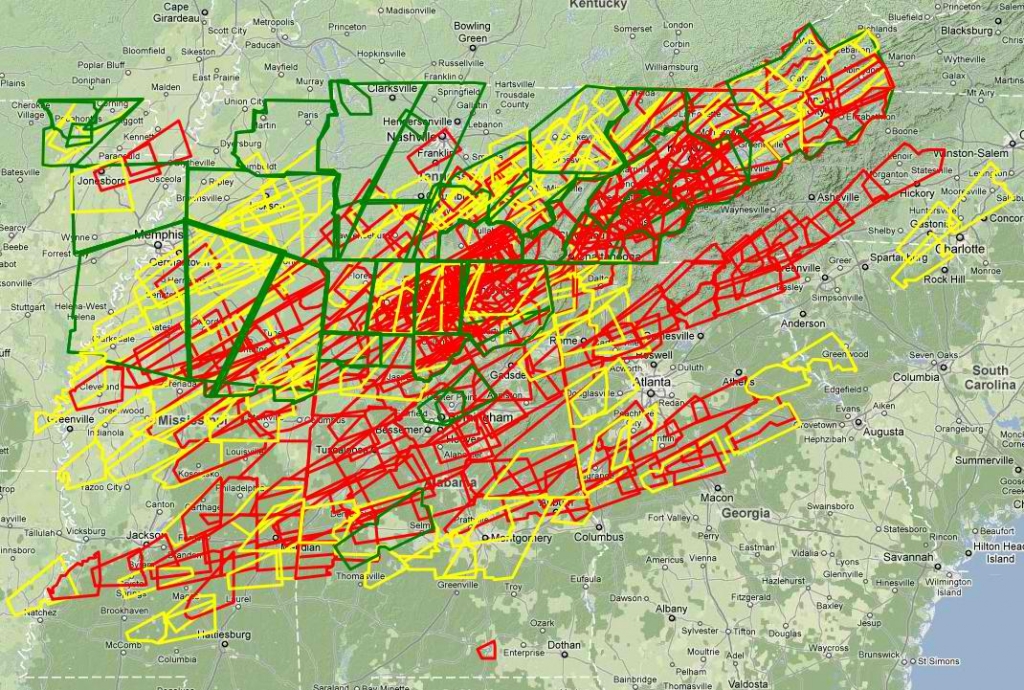 Weather Warnings and Watches For April 27th, 2011. The red lines are tornado warnings, the yellow are for severe thunderstorms and the green ones are for flood warnings. yikes!

After the 2nd siren, I checked the weather again and saw about 15 different warnings for Western and Central Tennessee for tornado watches (possible tornadoes) and tornado warnings (verified touchdowns) in other areas, as well as lots of flash flooding. So I pretty much demanded that we stay in a hotel for the first time on the trip. The hotel was about 100 yards from one of the sirens, and we were jolted awake 2 times in the night to a very loud, very stern man’s voice telling us a tornado warning was in effect, and to take shelter NOW. This is very alarming even when it’s not happening at 3 am. I quickly put on some pants, grabbed the dog and my phone and we all took cover in the bathroom until the sirens went off. The guys on the Weather Channel and the Memphis news were clearly running on adrenaline and 15 cups of coffee each, as this was clearly the most exciting thing to happen to Western Tennessee since the flood last year. The rain was insane, I haven’t seen rain like it since the flood in 1995, the gutters were useless, and it was just pouring off the edge of the roof like a waterfall. Gretchen was not fond of the thunder, which is totally unlike wimpy California thunder, the storms here practically shake the walls. Basically it was the least restful night’s sleep I’ve had in a long time. I think I probably got an hour and a half of sleep total.

The next morning the weather seemed to have cleared up near Memphis, but the clearing was because the edge of the storm was moving towards us. We’d chosen the one town in Tennessee that was sitting between storms, so we couldn’t go East or West. We also decided that we weren’t going to be able to do the thing we’d planned on doing in the area, which was a visit to the park where the Battle of Shiloh happened. We totally failed in our tour of The Civil War on this trip.

We did another drill of hiding out in a store when the sirens went off, and getting soaked by insane rain, and then as soon as the weather was clear we quickly set off for Memphis. We read up on where the tornadoes were in the area when we got there, and there were a couple within 10 to 15 miles of Savannah, so close, but not super close. Either way it’s probably a good thing to have an itchy trigger finger with the warnings than not!

The drive was clear and sunny, which afforded a better view of every river and creek in Tennessee that had jumped it’s banks, which appeared to be all of them. We didn’t see any other storm damage until after we left Memphis and drove to Nashville, the highway between had a lot of knocked down trees. The Mississippi in Memphis was pretty high when we drove by it, but it didn’t get to flood stage until after we left. We crossed the river again heading to Missouri a week later, and actually went through Cairo, Illinois which is the town they blew the levee’s in Missouri to save. It is a town with lots of cool old brick buildings, but it isn’t exactly a thriving town. I can see why the Missouri farmers downstream were offended that their land needed to be flooded to save some town upriver. The Mississippi had clearly dropped at least 4 feet, judging by the mud line on the trees, and the GPS’s river line ended about halfway across the river we drove over, and the surrounding farmland all looked pretty muddy.(Paul says the big Tornado that took out Tuscaloosa was while we were driving to Memphis, but we only found that out later.)

In short, California might be sitting on a fault that last had a decent size earthquake over 100 years ago, but so does Missouri. If you live in the Midwest and don’t know what I’m talking about, go to wikipedia and read about the New Madrid earthquakes of 1811-1812. The Mississippi flowed backwards! Church bells rang in Boston! So yeah, we’ll be moving back to the West Coast, where there are only earthquakes.

Lynchburg, TN
It’s like bourbon, but totally different even though it is exactly the same.
Next Article »