One of New Mexico’s most beautiful ghost towns with a tricky name. 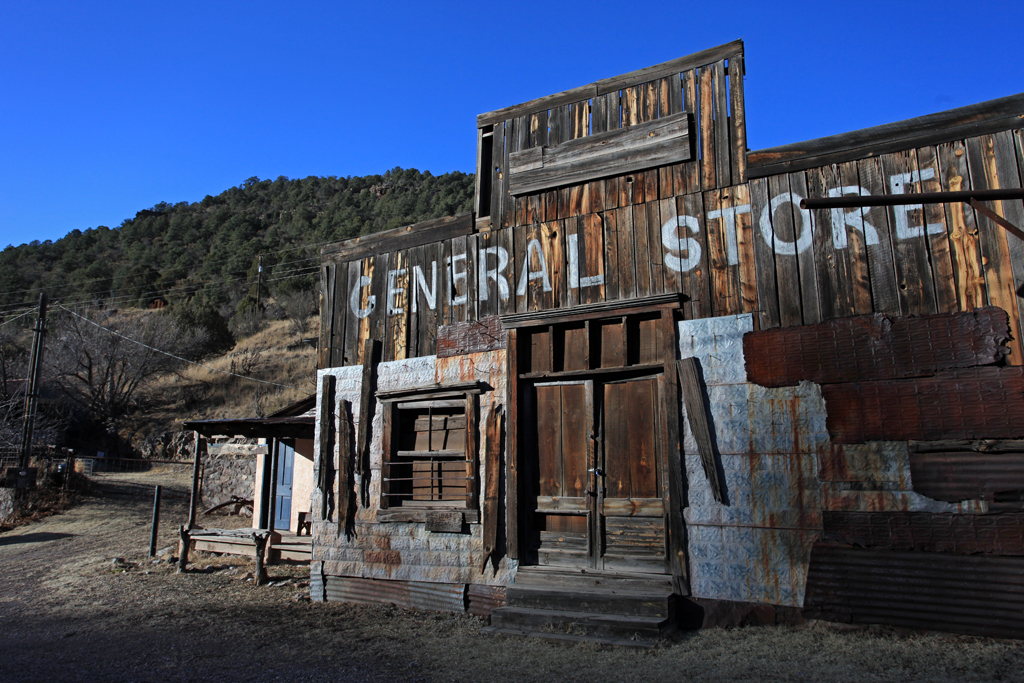 Mogollon General store Its a bit of a drive up there, but it's pretty incredible.

Before I knew how to pronounce the name (muggey-own), I knew about this town. Often considered as New Mexico’s best ghost town, It has perennially been on our list to go and visit. However, it’s extreme in-the-middle-of-nowhere-ness always kept it on the list for next year. So when we started planning our path through New Mexico Mogollon was the first place on our list.

It was founded in the 1870s by a U.S. Cavalry scout named James Cooney. He discovered gold while on a scouting mission but kept his find a secret until he mustered out of the service in 1876. However, his claim was regularly under threat of Apache raids and eventually Cooney and several other prospectors were killed in what is now called the Alma Massacre by a band of Chiricahua Apache. Several years later in 1890 a post office was established and the town of Mogollon (named for Don Juan Ignacio Flores Mogollon the former spanish governor of the territory) was set as one of the richest mines and one of the wildest towns in New Mexico. 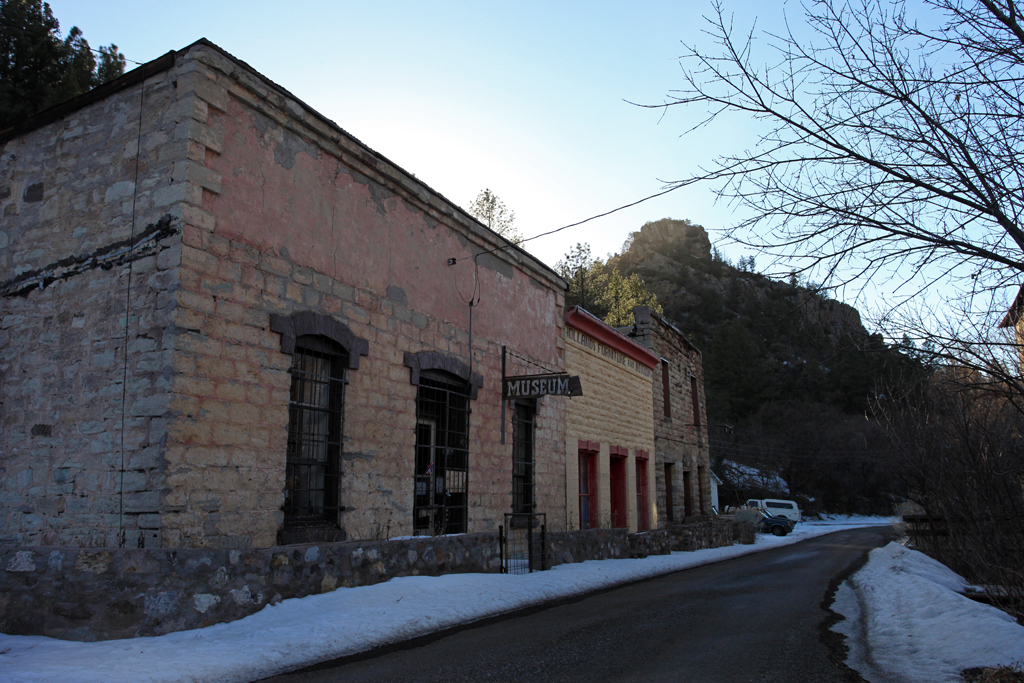 Downtown Mogollon The "Downtown" area. a stretch of old buildings.

As I said, the town is in the middle of nowhere, about 80 miles from Silver City and at an elevation of 6500 feet. The road that was cut through the mountains was built by convict labor and it doesn’t look much changed since it was first cut. Like most mining towns, it grew incredibly quickly to a height of about 6000 in the 1890s. And with that many people, the town got a reputation for being pretty rough and tumble. The stage line back to Silver City was robbed 24 times by the same guy before he was nabbed by the wells fargo men.

There was a reason for this insane growth though. The mines yielded over 18 million ounces of silver which is about 1/4 of all silver taken out of New Mexico ever. If all of that silver were in one place it would be a cube of about 6 and a half feet on all sides. There was a great deal of gold as well, $1.5 million worth of gold was mined in 1913 alone.

The Hospital did fairly brisk business due to the extremely high occurrence of “Miners Consumption” caused by breathing in the dust from jackhammers down in the mines. They ultimately had to create a new way of spraying water on the jackhammers and tailings to keep the dust down, since miners were lasting only about 2 years before succumbing. 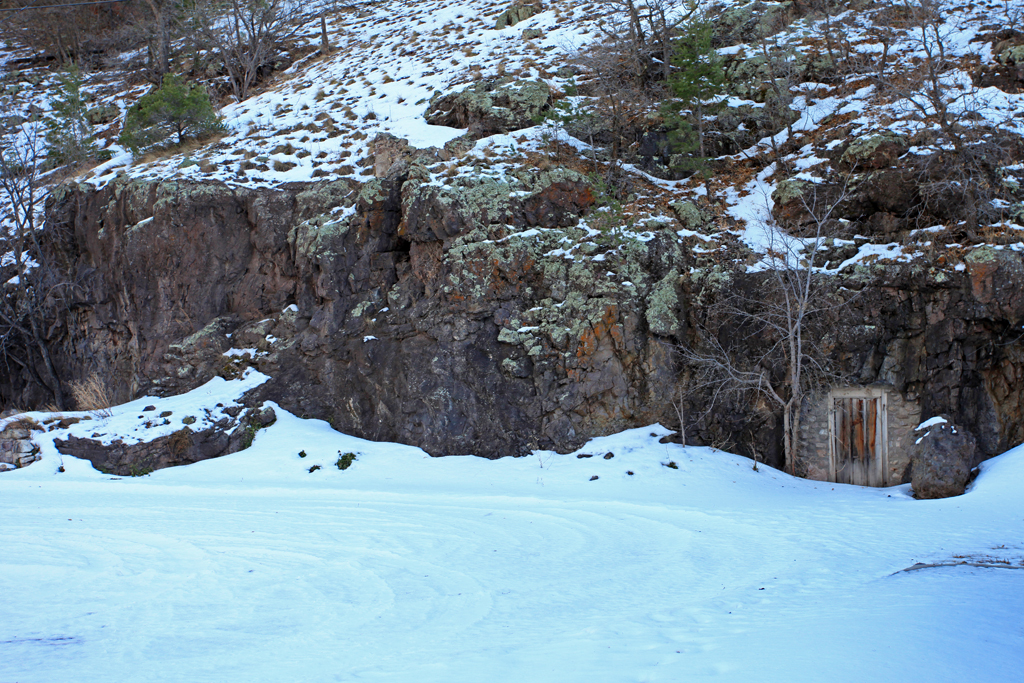 Mountain Door Mogollon has several doors like this leading into the mountainside. Not sure if it from mining, or just a good place for people to store things. There wasn't anyone around to ask.

Things have calmed down a bit now. There are supposedly about 15 residents mostly only there on a seasonal basis. Like many of these towns much of it burnt down several times, so it is really just a shadow of it’s former self, but what a shadow! We were there in February and it was very, very cold with snow on the ground. The town is technically closed in the winter – all of the business close up shop – which made the place seem even more ghosty. It was totally silent except for the slight squeaking sound of signs blowing in the wind. We were the only people there that we could see, though It felt a little bit like there were people peering out at us through the curtains.

Mogollon Main Street Looking back towards the the start of town. It was extremely cold up here this day.

As you drive into town you can see the remnants of “The Little Fanny” mine on the hill above town. It is a huge complex of abandoned junk. In town you drive through the “Downtown” area, where the most dense collection of original buildings are. This includes the museum and an old hotel that is now a pretty awesome looking bed and breakfast. Up the street are several houses and requisite abandoned cars from the 30s. Behind several of the houses are doors cut into the rock of the mountain. I haven’t been able to discover the purpose of them, and while it seems that they might be mine entrances, I would guess more likely they’re just a convenient place for cold storage made by people for whom digging into rock was not a big deal. Further up the street is the old general store and saloon which are exactly the sort of buildings you would see in an old western. Mainly though, this is because they were built for an old western, the Sergio Leone semi-comedy western, My Name Is Nobody in 1973. After this the road starts to wind further up the mounting and leads to the old cemetery, and up to some more houses.

I bet the town is more vibrant and fun in the summertime but I’m really glad we got a chance to go when it was totally empty. It’s also worth restating that this place is a trek from most places you would normally be, but it is all in the general vicinity of Silver City, The Catwalks, The Trail of the Mountain Spirits and Gila Cliff Dwellings.

Reserve, NM
Extraordinary native architecture that you can touch
Next Article »

Hanover, NM
It’s like a city... made out of rocks!